Last Friday I decided to head out for sunset up to my favourite east coast haunt, Bamburgh Beach, Northumberland.  It’s been ages since I’d been out for a sunrise, and the 1am alarm call was going to be a shock to the system, so home from work, it was pretty much food and bed time.  Leaving home at 1.30am for the two hour drive, in the rain made me question if it was the right call.  Trusting my gut instinct and of course The Weather Channel app, I wasn’t deterred.

An hour or so into my journey and I reached the A1 after crossing the A69, to see the sky already turning red.  This was a good 2 hours before sunrise!  I knew I was in for a treat.  I watched the sky all the way up the A1, it was just getting better and better.  Arriving at Bamburgh for 3.30am, an hour or so before actual sunrise, which is when I like to get on location, the sky was already on fire on the horizon.  I met up with a couple of good friends in David and David, got the wellies on and wandered down onto the beach.  Normally with Bamburgh, I don’t like to shoot at low tide, I find it too messy for my liking, but I’m glad I made the decision to head over.

The blue hour at Bamburgh for me, has the best blues of anywhere I’ve shot, and I’ve been and seen many places all over the UK to shoot.  I just love it.

The first shot of the morning, taken an hour before sunrise…. 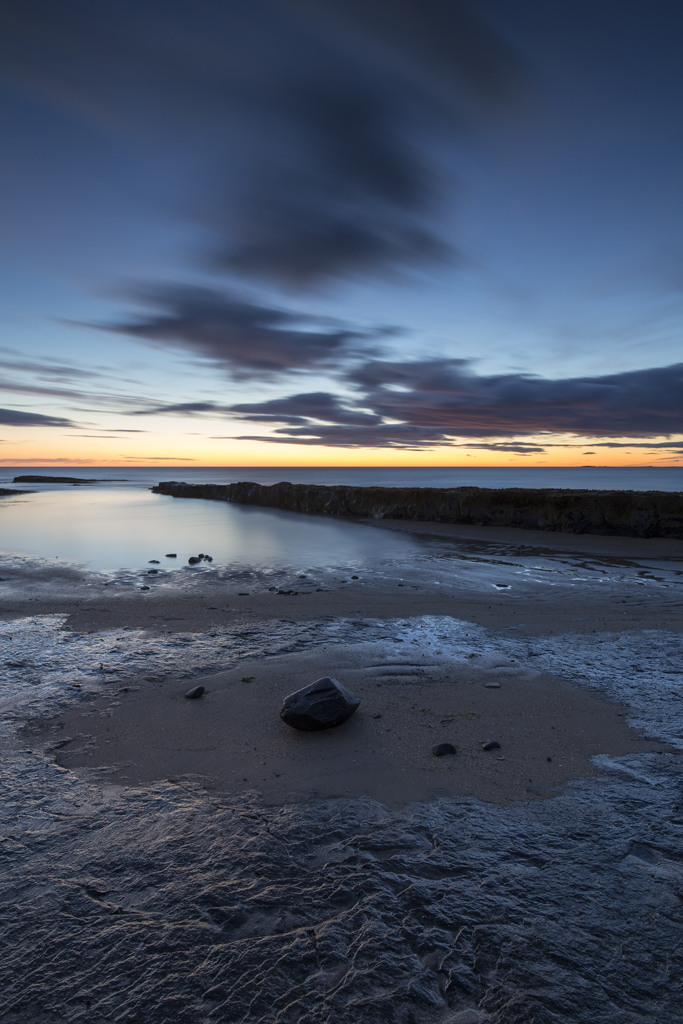 After wandering about the shelves and ledges of rock that’s only exposed at mid to low tides, I came across a small patch of sand with some lovely ripples made by the outgoing tide, with a soft light of the rising sun hitting them, leading the eye straight to the infamous Bamburgh Castle, so I just had to set up and take a shot….three other photographers in the scene, two are my good friends David and David… 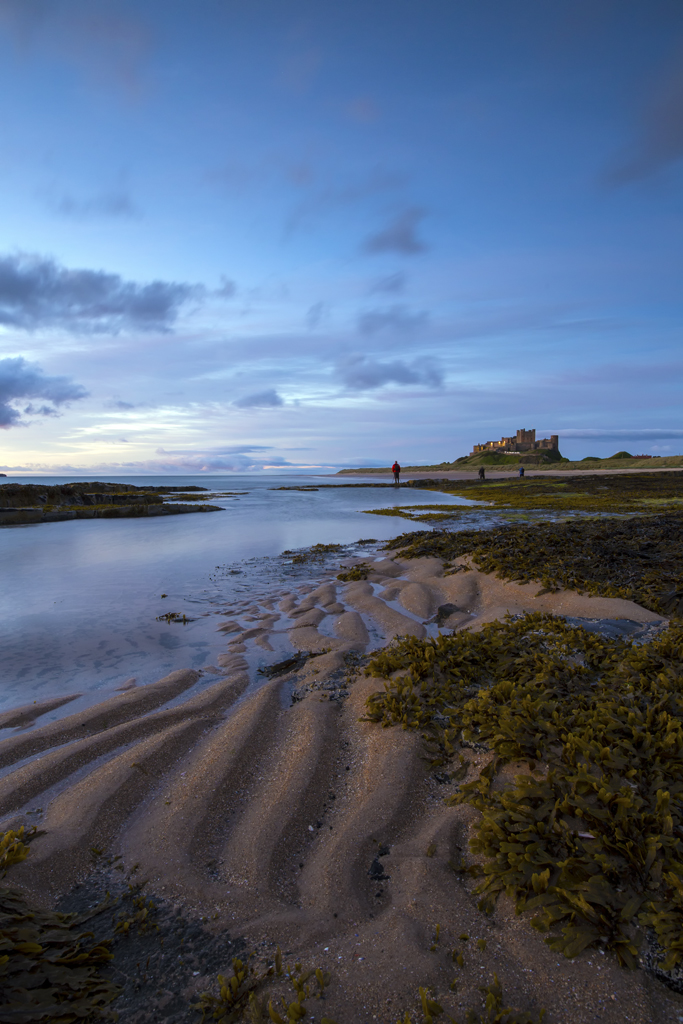 The sky was really turning by now, and the sun starting to really light up the clouds, so I went to a boulder I’ve spotted a few times, but never managed to get a shot I’ve liked with it in the foreground.  Luckily the tide height was perfect to capture the boulder still with a bit of water around it, just as the sunrise really started to kick….it was a trick walk out to over the slippery seaweed, but it was totally worth it…. 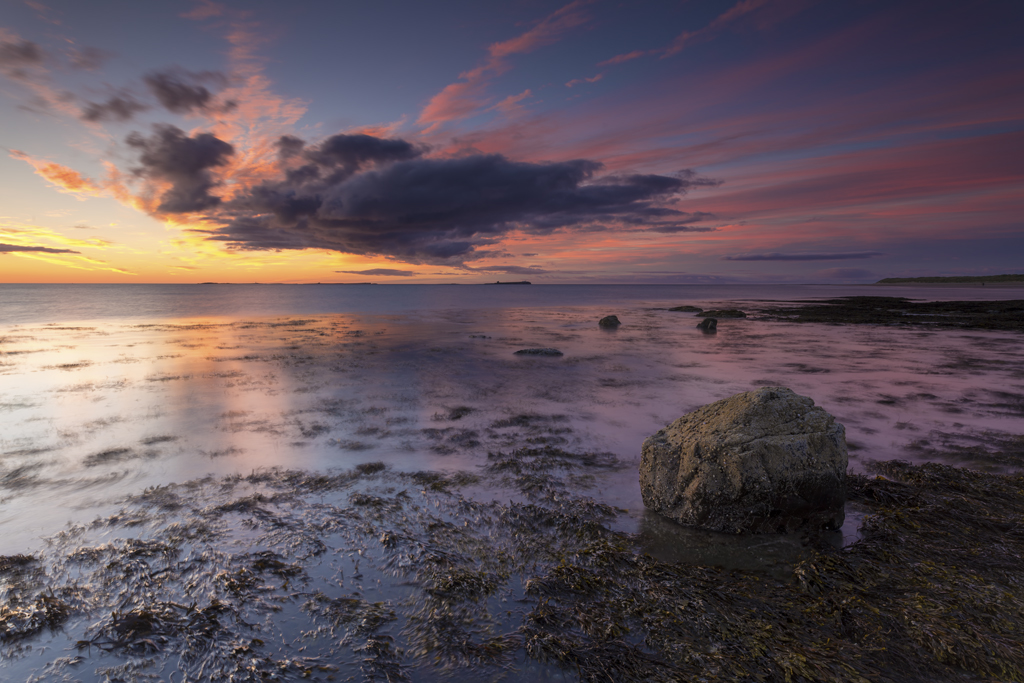 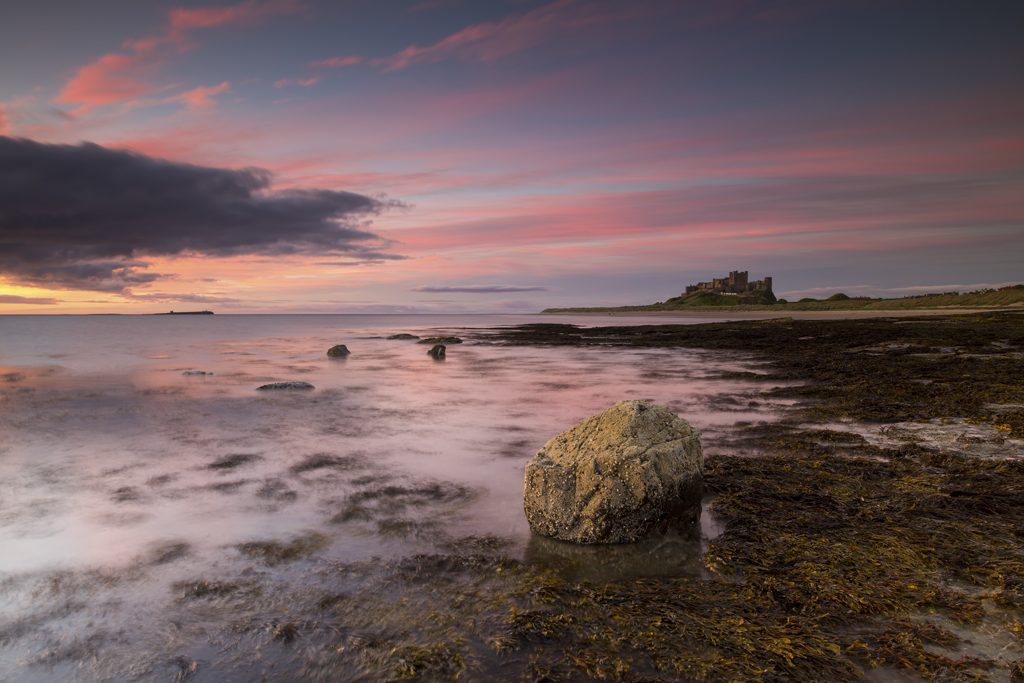 Another little wander about to try and work different compositions, and this ledge really worked, again leading the eye into the scene and towards the castle…more photographers in shot!  I think I counted a total of 8 out this morning, which is just a usual morning at Bamburgh, even in the middle of summer when sunrise is still early…. 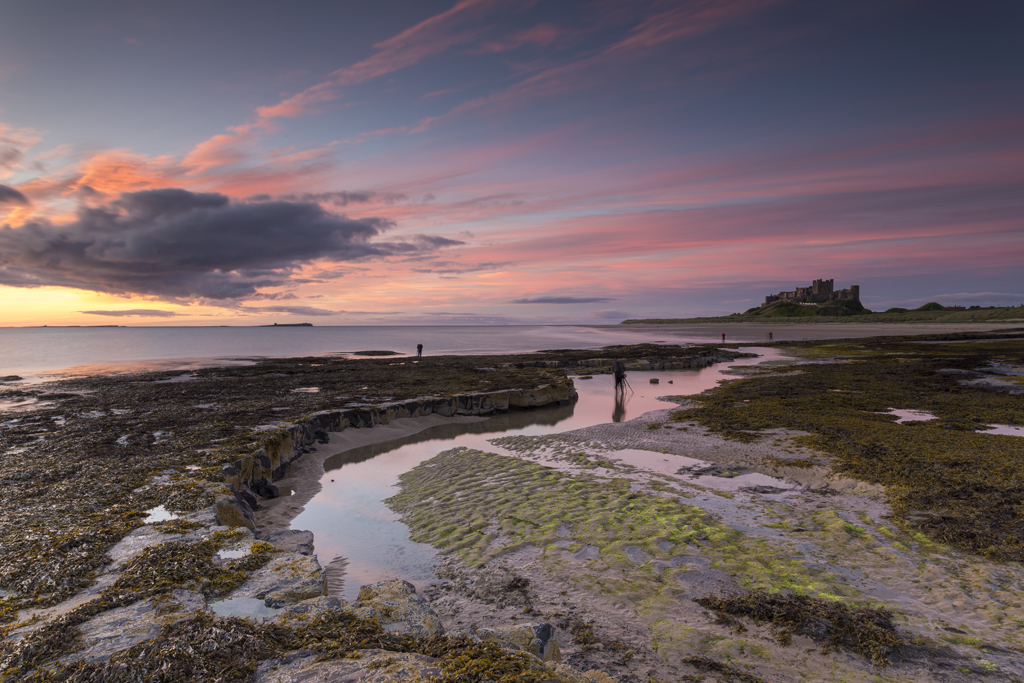 I know the beach like the back of my hand, having been visiting here for over 15 years now, even though only the past 4 or so with a camera, and there’s a wee rock pool forms on the rocks, which I always seem to get drawn to every time I visit, only this time I shot out to sea rather than towards the castle, mainly because of the sky that was still burning up… 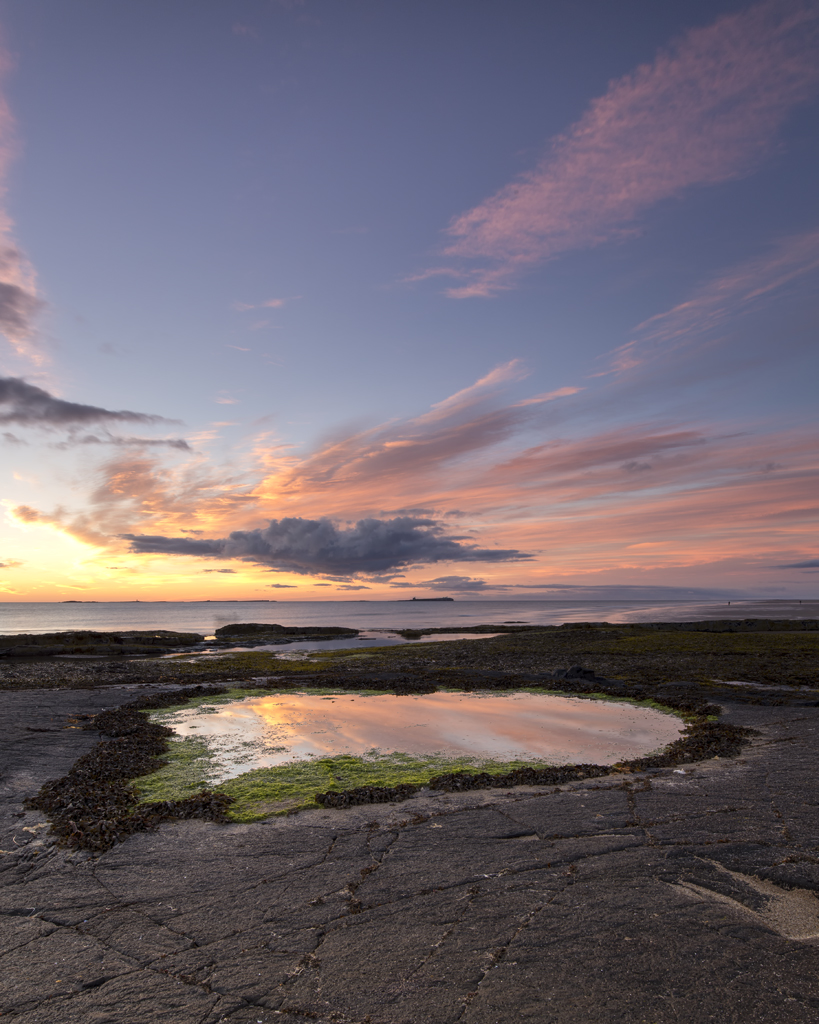 Once the sun broke the horizon, that was pretty much me done, it get’s too harsh to shoot towards, and I was more than happy with my photos I’d already shot, so myself and the two Davids just stood around watching the sun break the horizon, and had a good chat.  It’s always good to meet up with good friends, and when a morning like this happens, totally worth the 1am alarm call!

After I left here, David and I headed up to Berwick, and had a wander about Cocklawburn, scouting out locations for future sunrises, but mainly to kill some time until the cafe opened for breakfast.  If you’re ever in the Berwick-upon-Tweed area, I cannot recommend enough Cafe @ Marshalls enough.  The breakfasts are second to none and amazing value.  Situated just outside Berwick, next to Go Outdoors, worth popping in for great food served with a friendly smile.

Once breakfast was done, it was time to head on down the road, and decided to head down through the Borders, a great drive indeed, through beautiful countryside.  It’s hard to knock where I live.  Having arranged a catch up with my good friend Mark during the week, and kind of forgetting until I was half way home, meant I was going to be out until sunset, so once home, I had a bite to eat, then had to go do some boring stuff, and then head on down to meet up with Mark at Penrith.

We decided to head to ‘the tree’.  A lovely, dead, lone tree in the middle of a field.  I’ve shot it before, but never got anything I really liked.  We weren’t hopeful of getting anything like a sunset, because the cloud cover was pretty heavy, but we did get some nice light when we first arrived.  The field is full of barley, so we took care not to damage the crop and walked along the tractor tracks, and never strayed from them, which meant we were limited composition wise, but made the most f it.

There was a moment of colour in the sky and a nice bit of late light hitting the tree and crops, this image I was really pleased with and didn’t take too many more shots after this one, instead taking the time to have a good catch up with Mark…. 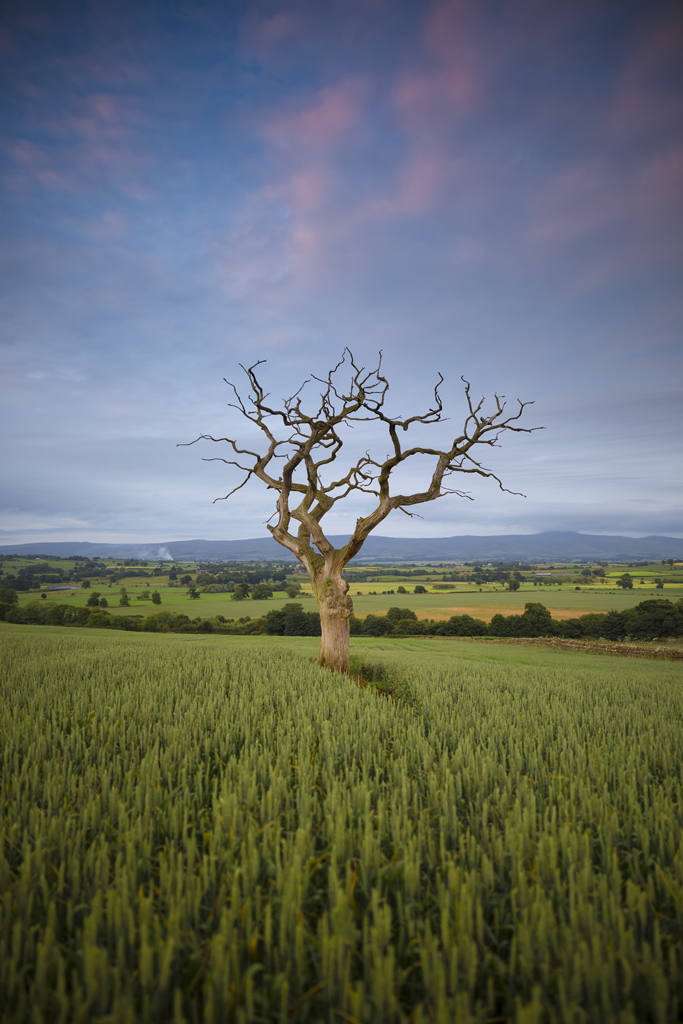 I took one more once the light had gone, but it still worked out well, just a landscape rather than portrait orientation shot this time… 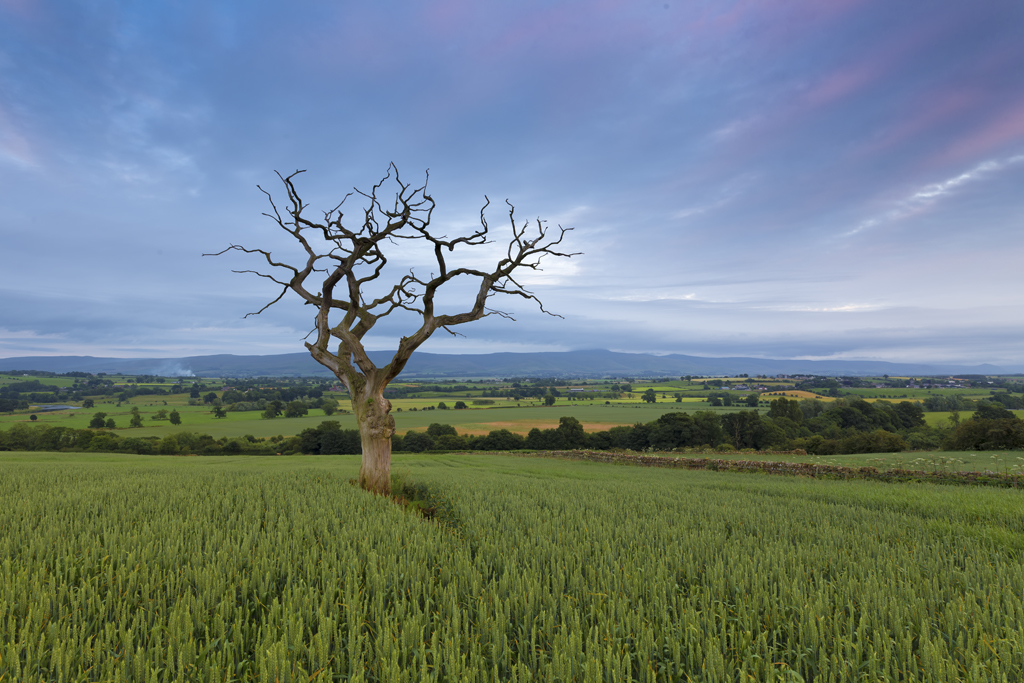 That was that.  Packed up not long after this, once Mark had decided to take some shots of me.  I’m most definitely best off BEHIND the lens!  A great day, albeit a long one, but I got to see an atomic sunrise on my favourite beach, had a lovely drive home through the Borders, and down into the Eden vally to catch up with my good mate Mark.

All in all, a successful day out with the camera.

Thanks for reading, if you made it this far!

9 Comments on "Sunrise to sunset…."